I found that the [slclick select] condition does not work on the latest versions of mIRC, only works on older versions 6.34 of mIRC and only the condition rclick event works on newer versions.

Is it a problem that can be solved at mIRC? 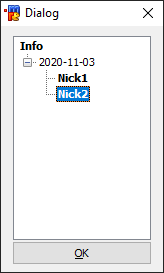 Thanks for your bug report. This issue would need to be solved in the MDX addon itself. mIRC has no idea how external DLLs, etc. work.
Posted By: Protopia

Just to clarify Khaled's response in case it helps:

1. mIRC provides a defined interface to DLLs which is mIRC-specific. It is the responsibility of the DLL author to ensure that their DLL conforms to the mIRC interface. Whilst Khaled generally makes every effort to preserve backwards compatability, the change from mIRC 6 to mIRC 7 was a very large and significant one to implement UTF support, so it may have been a necessary consequence as part of that, or it may have been an unintended consequence at some point.

2. It is further complicated by the fact that MDX is a DLL in its own right, and views.mdx is called from MDX. I have been unable to find either of these in a google search. But it is possible that there are later versions of these than the ones you are using if you are able to find them. But if there is anyone interested enough in helping you with this, they will need copies of the DLLs / MDX files that you are using as well as all the scripts that use them.

3. Apparently your mdx.dll and views.mdx files worked with mIRC 6.34 and doesn't work with mIRC 7.63. So at some point in the 12 years between August 2008 and August 2020, somewhere in the literally thousands of small updates to the mIRC code in those 12 years, something changed, and as we might imagine, it is probably a bit difficult for Khaled to track down which of these thousands of changes might have caused this.

4. Between 6.34 and 7.63 there have been lots of enhancements to mIRC dialog functionality - so it may be possible to replicate the same functionality without use of MDX / Views.mdx.

5. Looking at the Change Log I can see that there are 21 references to "dll" in versions later than 6.34, so it is possible that this might give TECO a hint as to what may have caused the DLL to stop working, though none of these 21 references jump out at me as likely to cause backwards incompatibility.
© 2021 mIRC Discussion Forums